ART BLAKEY: Messenger with a Mission

Art Blakey: Messenger with a Mission.

Jazz drummer Art Blakey was one of the most inspirational and important figures in Jazz for four decades – in fact, his work and sense of helping other musicians “make it” in the industry, still lives on to this day. His life is a fascinating account of survival 101 and keeping a positive mindset, even while living through great adversity.

According to an article in the New York Times, Blakey was born in Pittsburgh, Pennsylvania, on October 11, 1919 and orphaned shortly after his birth – “I’m a Depression baby. I was orphaned in Pittsburgh—I didn’t know my dad and my mother died when I was six months old, so I played jazz on account of survival because I didn’t like to work in the mines. They had child labour then and I worked in coal mines and steel works.” Arthur Blakey was raised by a woman named Marie Roddericker who was a friend or relative of his mother and who was highly religious. It was in church, that Art Blakey learned to play the piano and Mrs. Roddericker also ensured that Art receive piano lessons.

By Seventh grade, Art Blakey was leading a professional jazz band in Pittsburgh clubs as a pianist. He later switched to the drums, which he mastered on his own, inspired by the great swing drummer Chick Webb. Blakey developed great skill at the instrument, and he began to make a name for himself while performing with pianist and composer Mary Lou Williams.

In 1939, Blakey joined the Fletcher Henderson Band, and later played with bandleader Billy Eckstine. In that group, Blakey had the opportunity to play with Charlie Parker and Dizzy Gillespie. Gillespie is quoted, from the 1990 NY Times article: ”The first time I heard Art, I said, ‘Oh, man, let’s get that guy,’ ” Mr. Gillespie recalled. ”He had the knack of knowing when to play loud or soft, and when he played the whole band would lift right off the bandstand. He’d shout like somebody in a sanctified church. He was truly one of our greats.” Art Blakey contributed to the development of the bebop style of drumming, pioneered by drummers Kenny Clarke and Max Roach. By the late 1940s, Blakey was one of the top drummers on the scene, playing with musicians such as Miles Davis and Thelonious Monk.

When Eckstine disbanded his group in 1947, Blakey brought together a 17-piece band he called the Jazz Messengers – a name he would keep for his band throughout his career.It was also at this time, that he traveled to West Africa, where he was exposed to and influenced by African polyrythms. When he returned, he continued a series of recordings and performances with Thelonious Monk and Miles Davis that again helped to define modern jazz. In 1955, Mr. Blakey joined forces with Horace Silver, Hank Mobley and Kenny Dorham under the name Jazz Messengers, and he performed and recorded with that group until the late 1980’s.

An important element in Mr. Blakey’s success was the relationship he had with the Blue Note record label; between 1955 and 1961 he recorded a series of brilliant records that document the succession of his bands. Starting with ”The Jazz Messengers at the Cafe Bohemia,” recorded in 1955 with Kenny Dorham and Hank Mobley, the label released about 30 albums, including some made by his most famous band, featuring Freddie Hubbard on trumpet, Wayne Shorter on saxophone, Curtis Fuller on trombone, Cedar Walton on piano and Jymie Merritt on bass. 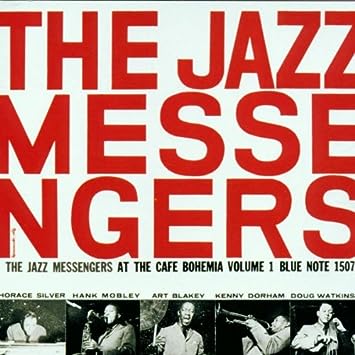 As he became a recognized bandleader, Blakey began to apply the other lesson he had learned as a member of Billy Eckstine’s band in the 1940s: He surrounded himself with younger musicians and nurtured their careers. “I’m gonna stay with the youngsters,” he told an interviewer in 1954 (as quoted by Richard Harrington of the Washington Post ). “When these get too old, I’m gonna get some younger ones. Keeps the mind active.” Blakey, in his mid-30s at the time, stuck to that philosophy all the way up to his final years. The Jazz Messengers had a rotating membership, and a band member might be dismissed with a firm “Hey man, I think it’s time for you to go,” but at any time from the mid-1950s until Blakey’s death, an observer hoping to identify the stars of the next generation of jazz needed only to take a look at the current Jazz Messengers roster. Blakey was eclectic in his choice of players, taking some criticism from black nationalist adherents of jazz as a result; the Jazz Messengers included white and Asian players, and even a Russian trumpeter, Valery Ponomarev.

His tradition lives on to this day, in venues like the Phoenix Jazz Messenger tribute concert recently held in Phoenix, Arizona. In a March, 2015 article from the Arizona Central Newspaper, saxophonist, Javon Jackson recalls his time with Blakey fondly:

“It’s still probably the most incredible period of my life.”

The celebrated tenor saxophonist joined the Messengers — whose ranks had by that point included Wayne Shorter, Freddie Hubbard, Terence Blanchard and Wynton Marsalis — in 1987. He stayed on until the legendary drummer’s death in 1990.

Like those other players, Jackson was a young, unproven talent when he joined the fold, just 21 and green but eager.

Part of what made that experience what it was, Jackson says, was “just being around Art, hearing his stories and getting firsthand information about Charlie Parker, Thelonious Monk, Bud Powell, Sarah Vaughan. Those were all his friends. So that was incredible to be part of him sharing that knowledge and giving us real good practical advice.

“I didn’t work with Miles but I don’t think there’s a bandleader that’s come along that’s better than Art Blakey. From people I know that worked with Miles as well, everyone felt Art’s leadership qualities and his ability to allow men and women to find themselves.”

35 available recordings in the Manieri Jazz Collection of the Anacortes Public Library:

The Estate of Art Blakey website. Accessed on the world wide web, April 19, 2015